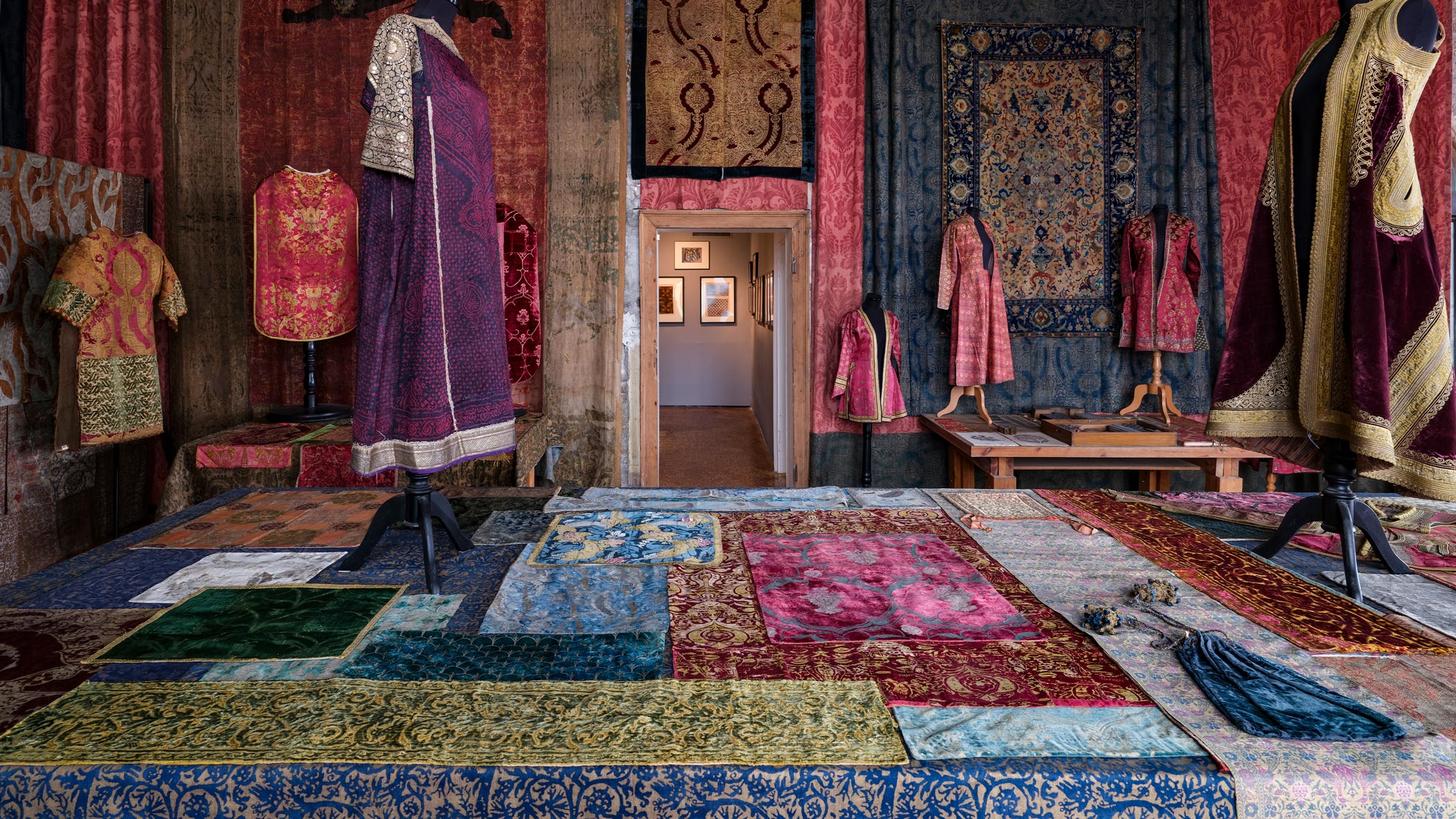 We were in Venice in April and I was drunk on aquamarine light. It is an airy light, playing with the moving dark surfaces of the canals, shining on stone and marble, bringing both together in changing ways, always aquamarine. I found that an odd thing was happening to me. Every time I closed my eyes – which I increasingly did deliberately – I saw a very English green, a much more yellow green, composed of the light glittering on shaved lawns, and the dense green light in English woods, light vanishing into gnarled tree-trunks, flickering on shadows on the layers of summer leaves. We were there to visit the civic museums, and I was very interested in the Palazzo Fortuny, the home of an artist of whom I had known almost nothing beyond the fact that he is the only living artist named by Proust in A la Recherche du Temps Perdu. I grow more and more interested in polymaths in the arts and I have always admired those whose lives and arts are indistinguishable from each other. And as I grow older I become more and more interested in craftsmen – glassblowers, potters, makers of textiles. My own ancestors were potters in the English pottery towns  - the Five Towns in Staffordshire.

As I grow older, also, I have come to understand that my writing – fiction and thinking – starts with a moment of sudden realisation that two things I have been thinking about separately are parts of the same thought, the same work. I think, fancifully perhaps, that the excitement is the excitement of the neurones in the brain, pushing out synapses connecting the web of dendrites, two movements becoming one. Every time I thought about Fortuny in the aquamarine clarity, I found I was also thinking about the Englishman, William Morris. I was using Morris, whom I did know, to understand Fortuny. I was using Fortuny to reimagine Morris. Aquamarine, gold-green. English meadows, Venetian canals. When I came back to England and started thinking about Morris, visiting the museums that were the houses where he had lived and worked, I closed my eyes and found my head full of aquamarine light, water flowing in canals, the dark of the Palazzo Orfei.

Fortuny was born in  Granada in 1871. Fortuny’s father, Fortuny y  Marsal was a distinguished painter, and his mother Cecilia de Madrazo came also from a family of artists, architects and critics. Fortuny y Marsal died of malaria when he was only thirty-six years old – his collections of pottery, armour, textiles and carpets, as well as his paintings and etchings were an essential part of Fortuny’s life and work. In 1889 the family moved to Venice – partly, at least because Fortuny was allergic to horses, and suffered from asthma and hay fever. There they lived in the Palazzo Martinengo on the Grand Canal until Fortuny bought the Palazzo Pesaro Orfei in 1899.

We went to the Museo Fortuny, in the Palazzo Pesaro degli Orfei, on a sunny spring day. Fortuny bought the house at the end of the nineteenth century – he was already working there in 1899 – and moved into it with Henriette in 1902. It was built from the mid fifteenth century, and stands, not on the waterfront of a canal, but between  the Campo and the Rio di Ca Michiel. Ruskin admired it for its “masculine” elegance, and it has two intricate facades on the Campo and the Rio, with rows of large mullioned windows – with round “bottle -bottom” panes, and interior courtyards and loggias, where a wisteria grows strongly. When Fortuny first saw it, it had fallen away from its rich days when it had housed important collections of paintings, and had been divided into  rented apartments for workers – when Fortuny moved into his first two rooms there were 350 craftsmen and others working there. Fortuny acquired more and more space, bit by bit, and was finally able to restore the original Venetian spaces inside the building. These consisted of two large portegos – on the ground floor and on the first floor – and above them huge attic spaces. A portego is a long salon with small rooms at each end where work is done. The first floor portego was where the Fortuny lived and worked. The second floor was the workshop where over 100 workers made the silk and velvet fabrics, and stitched the wonderful clothes. When we went in for the first time I was dazzled by the darkness – the walls are dark, the rooms are dark, and inside them Fortuny’s paintings and fabrics glimmer and glitter on the walls. When I went to Topkapi in Istanbul I remember my guides explaining that this was the richness of an originally nomadic culture – which cherished carpets and hangings and things which could be moved, redeployed, folded. Fortuny’s spaces seem to have something of this quality, Arabic or oriental. I was pleased to read that one winter, to protect himself and his work from the cold, he did in fact put up a giant marquee in the portego.

Fortuny’s interest in fabrics was first aroused by his mother’s rich collection of ancient fabrics in a trunk which she would open to show  her guests amazing dyes, designs, and weaving. Looking at the portego in the Palazzo Fortuny, one can see the continuing influence of this changing richness – it is both a showroom, and a living space, with works of art and craft, sometimes with mannequins with Fortuny garments draped around them, sometimes with screens or settles over which wonderful fabrics are apparently casually thrown. To think about Fortuny is to think about light. Light reflected from silk and velvet – and flesh – light on water and stone, airy light, dense light, almost infinitely varied coloured light.

Antonia Susan Byatt is a English writer and literary critic. She has won numerous literary awards especially for her novel Possession, A Romance