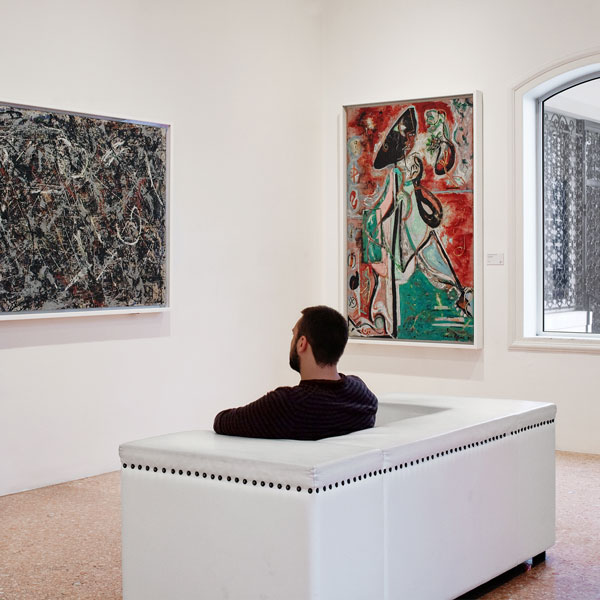 Palazzo Venier dei Leoni on the Grand Canal does not resemble a ship, moored for 30 years and turned into a fashionable restaurant with sophisticated dishes and pompous waiters, nor an expensive Venetian hotel, with lacquered furniture, marble paving, ancient engravings and private water taxi, nor the villa of an aging Hollywood star who has decided to end her days in the comfort of Venice, nor a fashionable boutique. But it resembles a museum even less. Despite this, it is one. Not large. On the contrary, even small. But I think it is the best museum of 20th-century figurative art, with everything necessary inside. In this case the number of rooms does not matter. And the tongue refuses to call them museum rooms, those in which echoes resound, elderly attendants get bored and the parquet squeaks beneath the feet of the hoards of tourists awaiting their guide. That which matters is what is found in these small rooms. And more or less everything that responds to the name of ‘Modernism’ is there. It is a small stone recipient, full of the rich cream of a new and terrible art, which arose marking an even more terrible century that, relentlessly, almost like the blade of a bulldozer, moved away from the painting of all previous centuries, pointing to a new system of cultural coordinates.

Peggy Guggenheim was a seeker of adventures, a lioness in the private fashionable world of her father, who ended up at the bottom of the ocean with the Titanic; an American exile from a family of millionaires, inclined towards changes of place, partners, lovers and Bohemian circles, a woman who spent her stormy existence nourishing her fascination with the new, never before seen art. She had a nose for genius, excellent taste and the tigerish cunning of an ambitious collector of the new. It is largely down to her that the world heard about Marcel Duchamp, a mad hermit who had completed his crazy visual discoveries at the start of the century, able to determine the entire future development of Modernism; an artist who, starting with his Fountain of 1917, went on to Pop art, Minimalism and Conceptual art. Peggy helped Marx Ernst become himself. She personally knew the geniuses of pre-war Paris. She snapped up paintings by the European Surrealists, Dadaists, Abstractionists, Futurists and Constructivists. After the war she was able to recognise the genius of Jackson Pollock, Mark Rothko, Roberto Matta and Willem de Kooning. She assured herself of the cream of Modernism with meticulous consistency, filling her container with it. By 1951 it was full. Peggy sealed it and chose a place, in Venice, on the Grand Canal.

Anyone wishing to can now savour this dense draught and, wandering through the not enormous rooms of the museum for an hour and a half, understand what happened in 20th-century art. Malevič, Kandinskij, Duchamp, Dalí and Picasso are found one beside the other in these rooms. And they are not squeezed in there.

Over the course of her entire life Peggy Guggenheim collected the elixir of immortality for herself. And in the end she succeeded. It is found on the Grand Canal, in the Palazzo Venier dei Leoni. People come here from all over the world to be initiated into the mysteries of Modernism. The most striking thing is not so much the density of masterpieces by surface unit, but the special, unmistakable sense of welcome that rests in this place, in these rooms, in this garden, in this view onto the water. A special breath dominates here, almost as if some enormous, invisible being, clicking on the outsized mouse of a giant computer, had compressed the ‘20th-Century Art’ window, closing it. And now we go into this compressed space packed with decades, biographies and destinies.

But that is not all.

The compressed space does not exist in itself.

The palazzo with its paintings and sculptures by the geniuses of Modernism is only the tip of the iceberg. Like all the buildings in Venice, it rests on wooden foundations, piles driven into the muddy bottom of the lagoon. In order to build the palazzo it was necessary to bring dozens of trunks, sink them into the sea-bed and, only then, build. The most surprising thing is that the number of trunks brought here at that time from Croatia and turned into the foundations of the palazzo is the same as the number of works exhibited in the Peggy Guggenheim collection: exactly 329. Once they were all trees, growing in forests, their leaves rustling, giving shelter to birds and squirrels. Then they were cut down, stripped of their branches, loaded onto boats, brought to Venice and planted head-first in the sea-bed. Is it possible that this took place solely so that these once magnificent trees, stripped of their beauty and planted in the muddy sand, could softly support the building? In the other buildings this was the case, but not here. Here something happened that man’s tongue has difficulty finding an  explanation for. Dali said that the meaning of his paintings is so deep that they preclude any logical analysis. That which happened in the Guggenheim museum is also capable of shaking the basis of earthly logic. It may be defined as a miracle. But it is better to remember the perspicacious Hermes Trismegistus and his Emerald Table: ‘That which is above is like that which is below’. He intended not only the stars, the atoms and the immaterial bodies, but also the balance between opposing worlds, a kind of hourglass containing ontological opposites that move from one to the other and are nourished by their diversity. In the case of this museum it is the art world and the vegetal world, each one supporting the other.

Vladimir Georgievic Sorokin is a Russian writer, playwright and painter. He has won numerous literary awards including the Maxim Gorky Prize with his novel Lëd