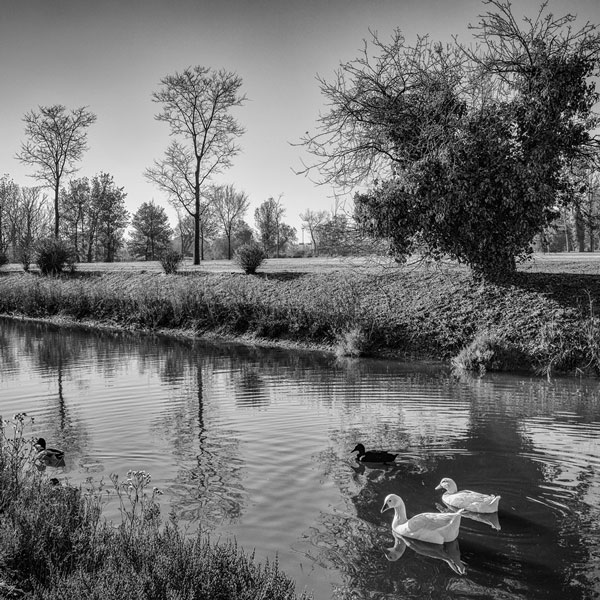 The Torre Massimiliana is brownish-red, round, with the white lines of its stone decorations and the darkness of its splayed windows, to see without being seen, to shoot with artillery. Around the tower is the wood from the restorations that have recovered the building, grey pebbles and pink-yellow flowers. A sun takes hold of the entire lagoon, making it red. There is the smell of water. The sea is nearby, present, immediately beyond Punta Sabbioni, which once did not even exist. The island of Sant’Erasmo, to the north of Venice, once bordered the Adriatic. Then a breakwater was built, the earth accumulated, the sea went further away and the lagoon widened. I look around. I see this island of sand, roofs and wide windows. I see this rich garden: chicory, carrots, tomatoes, aubergines, cauliflowers, pumpkins, courgettes. Primarily asparagus and artichokes, the castraure. There is a modern church, with curves, a few shops, a scattering of houses, more tracks than roads, tractors and bicycles, few people. The plastic boats and the typical ones. There are embankments and sun umbrellas. Hens. Vines, grapes that leave sugar on the hands. There is the knowledge of the farmers; sea farmers, who use male crabs to fertilise the earth. Sant’Erasmo is big, the second largest island in the lagoon after Venice. It is good to wander around there, to walk beside the lagoon or leave it behind and find it again on the other side, getting lost in the fields. There is space, which there isn’t in Venice. There is air, horizon, rest, an unexpected freedom. Sant’Erasmo is a surprise. It doesn’t have the proportions of Venice, which continues to Murano, slightly more industrial; it doesn’t have the slightly idle balminess of Burano, nor the sanctity of Torcello, green and gold, stone and brambles. It is countryside that smells of salt. Venice cannot be understood without its lagoon, without its fish and bunkers, glass and ships, monasteries and hospitals. Without the islands, the secret of Venice evades you: nature. Venice is the artificial, yes, the human, the engineering of its crooked bridges, the economy that decides where you live and where you cultivate, where the arms are and where the goods are, the beauty of Rialto and St Mark’s, the anxious accumulation of the Frari, or of the Accademia. But it is the human who achieves, fights, inhabits the surrounding nature. Venice is the pact between man and water, celebrated every year at the Feast of the Ascension. The marriage of the sea, the ring thrown into the water: ‘We marry you, sea, as a sign of true and perpetual rule’. Venice is Tintoretto and mud, Tiepolo and breakwaters, Istrian stone and rocks, churches and shoals, oars and corbs. Artichokes. Those who come to visit notice that Venice has its own smell, which many do not like. We Venetians remember it when we come back from a journey. As soon as we arrive, we sniff our home. This is because Venice is of the water. Like water, it changes. It has changed over the centuries. It has been many cities, of fishermen and sailors, of traders and shipyards, of art and tourism. Its islands have also changed. At Sant’Erasmo there have been wars, the Genoese who took over in the middle ages, the Austrians who fortified the lagoon, built the tower. There have been miasmas, the plague deaths in 1348. And migrations, populations moving in to escape the Barbarians, who then fled in 1500 to escape the plague, returned in 1800 and have gradually declined since 1966, the year of the big flood, to less than 1000 residents. But Sant’Erasmo has always had its function: to feed Venice. Here, still, there is the sowed earth, the big boats that leave at dawn for the markets. And it is perhaps because of this that also here - where although everything seems suspended - you feel time passing. It is because of the ruins, the monasteries and the mills that no longer exist. But it is also because there are things that grow here. Because there is the cycle of the earth, the seasons, the things that hail can destroy. Yes, we build churches and paint canvases, we invent boats and ways to row with power, we look for things that last and talk about them to make them last, we restore towers and cultivate the earth, we divert rivers and challenge the tides, but then we are here, in the midst of time. I take the number 13 vaporetto back to Venice. It goes between piles and seagulls, in the dark-red of evening. In the background is the concrete of the Mose. Sant’Erasmo seems to have nothing to do with Venice. But going there is not only a different day, an unexpected delight, the pleasant, brimming tiredness of having done kilometres, a unique way of being in the midst of nature and taking a dip without a crowd. Sant’Erasmo teaches Venice. Perhaps the sea will one day take back the city. Perhaps man will continue to rescue it, perhaps he himself will destroy it after having created it. In the meantime, the artichokes continue to grow.

Giovanni Montanaro is an Italian writer. Finalist in the Campiello Prize of 2012 with his novel Tutti i colori del mondo