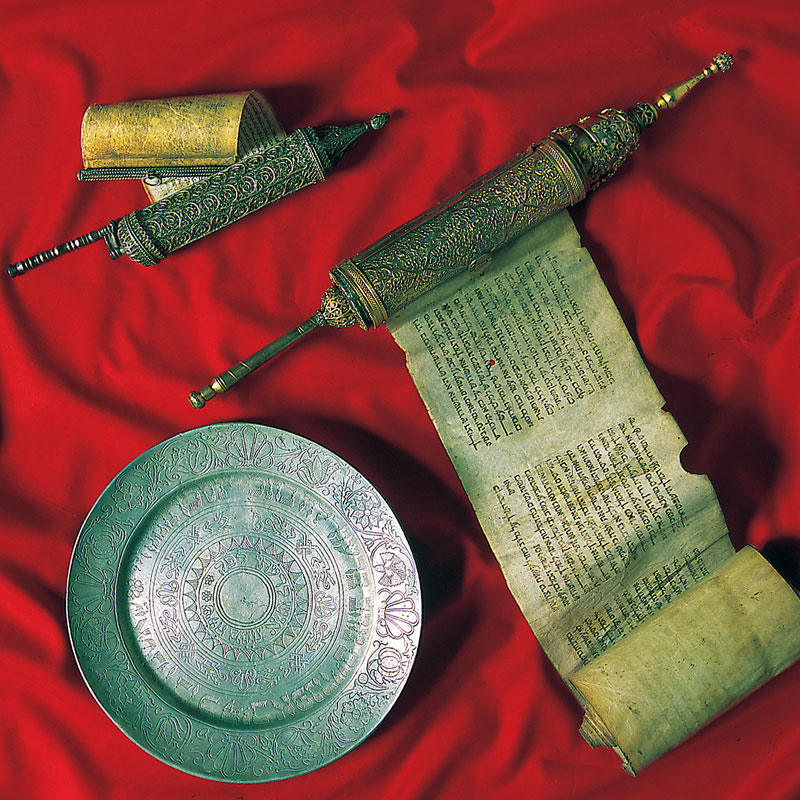 When did the first Jews arrive in the lands emerging from the lagoon? The origin of the name Giudecca would suggest proof of a fairly early Jewish presence, though some think the term refers to the expression del giudicato (of the judged), in Venetian dialect Zudegà (some families accused of having conspired against the republic were imprisoned on the island of Spinalonga) from which, later on, Judecha, Zuecca and Giudaica.

Among the many 14th-century documents proving the presence or transit of Jews in the lagoon area, we note in particular the decree of 1386 with which the Venetian senate granted them an isolated area on the Lido to bury their dead. And the previous year, 1385, it had made an agreement with some Jewish lenders in Mestre allowing them to lend money to the poor in the city.

In 1508, with the war of the League of Cambrai, Venice rapidly lost almost all its mainland cities and saw enemy troops very close at hand. Many refugees, among them numerous Jews, sought protection in the lagoon. After the defeat of Agnadello in 1509 the situation became even more dramatic. Franciscan preachers had for months been repeating that in order to win back God’s favour it was necessary to atone for one’s sins. And one of the most serious sins was that of having allowed Jews to live freely in the city. On 20 March 1516, when the danger was actually over, Zaccaria Dolfin, in Collegio (cabinet), asked that they be confined to the Ghetto Novo, an ancient area similar to a fortress, in the parish of San Gerolamo. The doge gave his approval, as did some patricians, and the decree was issued on 29 March.

In previous centuries there had been a foundry in the area, which in Venetian dialect was called a getto (from gettare, ‘to found’), giving ghetto. But some think that the term derives from the Jewish ghet (‘repudiation’ ‘divorce’) or the Provençal word gaita (‘guard’), given that four guards controlled the enclosed area. The Jews, however, both in Venice and elsewhere, called the ghetto chatzer (in Hebrew ‘enclosure’) and, in Venetian, hasser.

After the expulsion of the Jews from Spain (1492) and Portugal (1496), the thousands of travellers who came to Venice included numerous Levantine Jewish merchants (known by this name because before coming to Venice they had passed through or stopped in some port in the Levant, such as Salonika or Constantinople). On 2 June 1541 they were allowed to occupy a long calle surrounded by other smaller ones next to the Ghetto Novo: the Ghetto Vecchio.

In June 1579 Daniele Rodriga asked the senate for permission to bring to Venice 50 families of Jewish merchants, each  prepared to pay a tax of 100 ducats. The Cinque Savi gave their approval only in 1589. They were not spoken of as Spanish Jews or Marranos or new Christians, but, in a more blurred form, as Ponentine (western) Jews.

After the settling of the ‘German nation’ and the ‘Levantine nation’, with the arrival and recognition of the ‘Ponentine nation’, the three successive settlements ended and, together, gave rise to the ‘University of the Jews’, as the Venetian Jewish community then became known.

Isolated, marginal and remote from the city, the ghetto was the stage for the stories of the Jews of that time. Access to the Ghetto Novo was only through long porticoes under the very tall houses, some of up to nine floors, as shown by some 18th-century land registers. The campo opened up in its circular breadth and all the windows of the houses faced onto this single focal point. This circularity can still be admired today, but on one side, towards the Rio di San Girolamo, is the 19th-century Casa Israelitica di Riposo for the elderly. On one side the campo ran into the Ghetto Vecchio, a long calle crossed by smaller, winding calli: Calle Storta, Corte del Moresco, Corte dell’Orto, Calle Barucchi, Campiello delle Scole and Scale Matte. On the opposite side, connected to the campo by a narrow bridge, was the Ghetto Novissimo (a small area added in 1633) with its fine, sturdy buildings, a solely residential district for the most recent arrivals. The tall buildings probably rose higher than they do now, because the houses round about were more scattered, there were lots of gardens, convents and monasteries and streets full of mud and earth. The tenement stairs were in wood, so as not to cause overloading, as were almost all the walls and structures that separated the rooms, divided the attics and dissected the small apartments with very low ceilings and shared facilities.

The inhabitants of the ghetto were involved in many small trades: apart from the rag traders, there were craftsmen, minor merchants and dyers; others worked in the production of oil, wine and kosher food, or managed inns for travelling Jews. Doctors had a particular role and importance in that restricted society, in which another important event was the founding of a fairly renowned Jewish publishing centre.

The greatest flourishing of the ghetto was in the 17th century, which also marked the start of its decline. The first inhabitants numbered 700, the population then grew constantly such that in the mid-17th century it seems there were from 4000 to 5000 people there.

In the meantime the Serenissima was in the grip of a slow but irreversible decline and its hegemony over the Adriatic was also soon threatened. In the years from 1669 to 1700, the University of the Jews paid the enormous sum of 800,000 ducats into the coffers of the Most Serene Prince and, later, a further 150,000 ducats.

In 1797, while the republic faltered under the thrust of Napoleon’s armies, the Jews in the ghetto offered silver and gold to help the exhausted city for the last time, such that the Venice senate – in what was one of its last actions – issued a decree of thanks to them.

On 7 July 1797 the removal of the gates to the ghetto was decreed by the provisional municipality.

During the subsequent Austrian rule, although they were subject to some restrictions, the Jews could make numerous choices that until a few years before had been unthinkable: to buy property, practise liberal professions, perform military service, take up public employment and join cultural institutions like the Ateneo Veneto, the Istituto Veneto and the Accademia di Belle Arti.

In 1866 Venice became an integral part of the kingdom of Italy, and the victory and arrival of Victor Emanuel II’s troops were greeted by the Jews with enthusiasm. According to the 1869 census there were 2415 Jews in Venice; of these 64% lived in the ghetto and surrounding areas and 23% in San Marco. The names of some members of the community became linked to precise achievements, such as Luigi Luzzatti (later head of the Italian government), who founded the Istituto commerciale superiore, the current Ca’ Foscari.

In 1938 the racial laws oppressed the entire Italian community. The Venetian Jews, numbering about 1200, were suddenly discriminated against, expelled from schools and jobs. The situation then deteriorated rapidly after the armistice of 8 September 1943. The Germans occupied the city and on 16 September the president of the Jewish community, Giuseppe Jona, committed suicide to avoid being compelled to give the list of members to the Nazis. On the night of 5 December the Fascist Republican Guard and the police force conducted a big round-up in Venice, at the Lido, in Trieste, on the islands and at Chioggia. More than 100 people were arrested, including children aged between three and fourteen. Between the summer and autumn of 1944, the SS, on the orders of Franz Stangl, deported 22 residents of the Casa di Ricovero, 29 hospital patients, some psychiatric patients in the hospitals of San Servolo and San Clemente and the community’s chief rabbi, Adolfo Ottolenghi. More than 200 Venetian Jews were deported; only seven survived.

After the war, the community, reduced to 1000 people (in 2000 the number of members had dropped to 420), began to rebuild its social and religious fabric. Life slowly returned to the ghetto, first with the transfer of community offices that had previously been in other parts of the city, then with cultural initiatives that attracted Jews and non-Jews to a historic place that is still alive today and visited by tourists from all over the world.

Riccardo Calimani is an Italian writer and historian