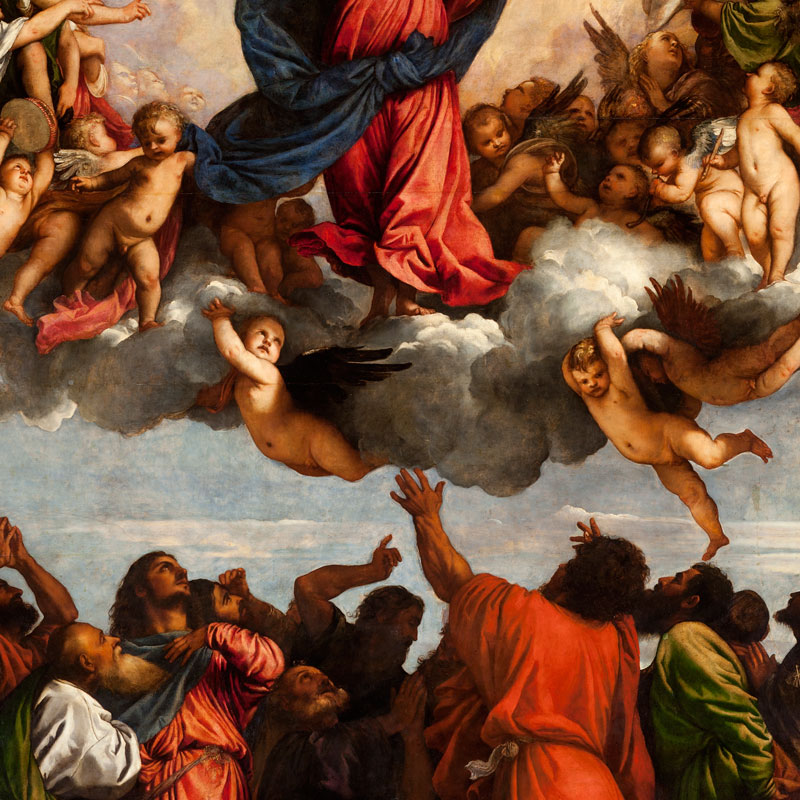 I had never seen the Virgin Mary’s feet. From a distance you don’t notice them, you can’t observe them. They are dark and in the shade. They are real feet, that have walked, that have got dirty on the roads of Palestine; the feet of a woman who has given birth, lived down here. Seeing the feet of a person is an intimacy, a closeness. Also with the Virgin. You have to negotiate steep steps, rungs and planks to find them. Everything creaks. I’m in the Basilica dei Frari, one of the most important churches in Venice. Titian’s Assumption, a famous painting that is almost 500 years old, is being restored; a skeleton of metal enfolds and protects her. The painting can barely be seen from below, but if you are lucky enough to climb the scaffolding you get very close. Only the painter and a few others have seen her from so close. She was not made to be seen from this position. But it is an extraordinary face to face; made up of details but also of space, of the sky that is behind her and that opens up from there, from a canvas. The Virgin’s look is soft, powerful. Titian painted two white signs in her pupils to give light and perspective to the look. Light. The light ascends. You have to climb up another level to get to God. God is also reached by grasping pipes, steps and pieces of wood. But I stop. The Virgin stops me. Here she is, the woman of Palestine who was a girl chosen by God. In whom God was in love. Catholic theology says that Mary did not die, but was assumed into heaven, body and spirit. She had a unique fate. And that painting is the ascent, Mary leaving the Earth above a cloud. Her divinity is in that human look, in that flesh grown weary on this earth but that – as in every woman – still has the strength for that last thing to be done. She is about to be reunited with the body of the Father. With he who loved her. The three levels of the painting are linked to one another by imperceptible gestures, fingers, puffs of clouds, cherubs. On the level below are the apostles; the models are fishermen of the Venice lagoon. They, too, are decisive, real men. Their physical strength is necessary, their arms are essential for pushing the Virgin up to heaven. It is a painting made up of real faces, saints without haloes, saints in the sense of the effort and truth of life. This is why it is a unique, awesome painting. It is said that the prior who commissioned it was stunned by it; such a modern painting, so lifelike, so human, had never before been seen. Quite unlike any previous Venetian painting, it was a real shock. It is said that that prior was tempted to refuse the work, as being too harrowing compared to a Vivarini, but also different from a Bellini, who is also a gigantic painter. You get a shock, seeing it up close. You feel the urge to embrace her, that Virgin, to caress her cheek, to observe the skin that shows all the pregnancy, the suffering from the death of a son, but also the joy at the assumption, at the death that is not an end, according to the Christians and all religions. Precisely, time. There are small squares on the canvas, small opaque squares. The panel is not being restored, it is only being cleaned. It has been almost 40 years since it was last done, I am told, and in those 40 years there has been damp, work on the bell tower, dust, dust and more dust. There is a big difference between the opaque square and the rest of the painting. In a few days those squares will also disappear. It is beautiful and terrible that time passes; Venice is proof of that. Time bestows beauty and removes it, gives prestige and an ending. It is nice to think that dust forms on paintings, that they are not immortal, that they, too, end; that it is luck to be able to observe them today and it is not at all certain that they will always exist. It is amusing to think that to save them they need plenty of cosmetic surgeons who give them back their youth, at times misinterpreting them, changing them forever like the nose or lips of an actress. Paintings are made with paint, but also with steps, rungs, iron and hands. I turn and see the church from on high, as I’ve never seen it before. It is very big. It is important, every now and then, to get a different perspective on things. To feel part of something grand. I start to go down the steps. The Virgin draws away, goes back to how I have always seen her. Time passes for her, too. Perhaps. Because in the end it is an immortal, Biblical painting. Her grandeur is in those faces, those bodies that, apart from the clothes, could still be met in the street; it is the questions they ask, which are always the same. The time that passes, the dust that settles, life; the grand, mysterious fate of every man, always unrepeatable for each and always the same for all.

Giovanni Montanaro is an Italian writer. Finalist in the Campiello Prize of 2012 with his novel Tutti i colori del mondo