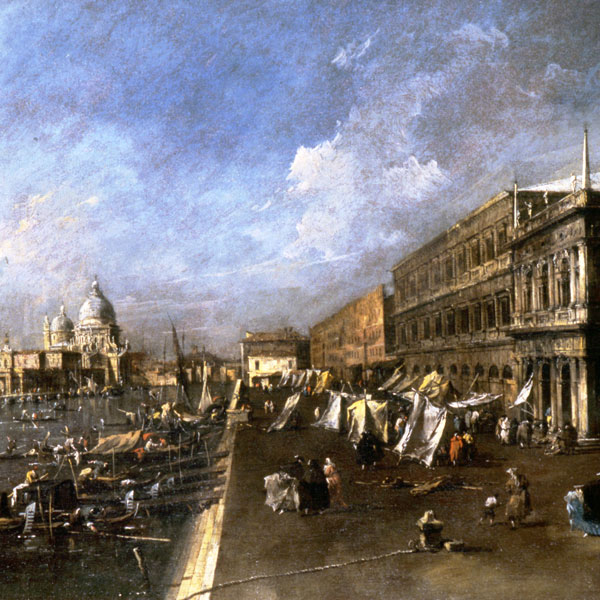 The Point of View of Eternity

There are, perhaps luckily, no more than one or two paintings by Canaletto in Venice. Almost everything he painted is in the UK thanks to the consul Joseph Smith (1674-1770), who had already spent 44 years in the city before being honoured with that diplomatic title, which rather he honoured.

But although today’s visitor cannot contemplate Canaletto’s pictures here and must make do with reproductions or memory, he can see numerous Venetian landscapes of the same period by Guardi, Marieschi, Carlevaris, Bellotto and Miraglia in the city’s various museums. And again, as mentioned, it may also be fortunate that he does not see the Canalettos, the most precise and meticulous of all, almost photographic. Because what he sees in those pictures by the 18th-century ‘view painters’ is, incredibly, the same thing he will see on leaving the Accademia, the Ca’ Rezzonico or the Correr Museum. This strange sensation produces a mix of euphoria and uneasiness. And certainly both these intensify if he has also seen certain paintings by Gentile Bellini, Mansueti or Carpaccio. He will discover that very little has changed not only in two and a half centuries, but in almost five. The 16th-century paintings will show him practically the same thing that was painted in the 18th century and the same that he will see in the 20th on the street, in reality, when, exhausted, he goes out of the museums. The most obvious difference he may note will undoubtedly be in the people and their clothing: very noble and very ecclesiastical, black hats, long hair, Renaissance cloaks and tight red, white or striped stockings in those of Bellini and Carpaccio; very middle class and workmanlike with wigs, pony-tails, masks, canvas umbrellas and baggy shirts in those by Carlevaris or Guardi; ghastly Bermudas and T-shirts covered in writing, very touristy, outside. The rest, that which is not human, remains identical.

The visitor already knows about this beforehand, and to a certain extent it is this archaeological feeling that has inspired him to travel here. But, despite everything, it is impossible for him not to be a little surprised if he stops to think about it or if he makes this simple test of looking at a couple of paintings and then at what surrounds him. Venice is the only city in the world whose past cannot only be seen, felt or imagined, but is right in front of you. Or at least its past appearance, which is none other than its current appearance. But the most exciting and alarming thing of all is that what is offered to the visitor’s eyes is also the future appearance of the city. Or rather, not only - seeing it - can one see what Venice was like 100, 200 and even 500 years ago, but actually - seeing it - one can also see what it will be like in another 100, 200 and certainly 500 years. So just as it is the only inhabited place in the world with a visible past, it is also the only one with a future already disclosed.

It really is stirring that, despite this, Venice has its own genius of 20th-century architecture, Carlo Scarpa (1906-1978), who was born here. But the case of Scarpa is significant. Adored by Venetians, his easily recognisable and admirable works are inevitably of details, which does not prevent his fellow citizens, who live in the midst of the most perfect architectural conglomerate in history, going into ecstasy before things like the Olivetti shop in St Mark’s Square, the entrances to the Architecture and Literature faculties, the ancient Great Hall (which he restored) of Cà Foscari, the staircase of the Balboni house or the Fondazione Querini Stampalia courtyard. Here there are four steps to be admired, there a roof, a door and further on a radiator grille. This is the work of the great Carlo Scarpa in the city of his birth. No one touches Venice as he was able to touch it. It is the city that best knows its own future, and perhaps for this reason its past - of immense, omnipresent and astonishing weight - is not contrasted with that identical and already known future, but with the threat of its disappearance.

Since I came to Venice the first time in 1984, I have always come back a couple of times or more a year. I may be wrong, but I have always had the feeling that the threat of catastrophe, irrevocable calamity, total annihilation is, more than a real fear of its inhabitants, a real necessity. This conscious apprehension, in my opinion stirred up, immediately affects visitors, probably even the most transient, who as soon as they set foot on a bridge have the feeling that this could be the city’s last day.

Venice is the most protected and observed city in the world, the most supervised, always examined. There is not only a universal desire to conserve it, but also to conserve it as it is. Actually, it is known that it cannot cease to exist, that it cannot be lost. It would not be allowed, surely, not even by a world war. This terrible certainty that something we see before our very eyes will continue to always be there, and moreover always the same, without the necessary measures of agitation and uncertainty required by all human enterprises and communities, without the possibility of a new life or a new flourishing, of growth or extension, without the possibility - in short - of surprise or change, ensures that Venetians have ‘the point of view of eternity’. This is how it is defined by Mario Perez, who, despite his name (no accent), is one of the few people born, raised and living in Venice who I have had the privilege of meeting and keeping in touch with. The point of view of eternity! The phrase made my blood run cold while we were dining: he, salmon, I a sole. Can a more disturbing, more intolerable, more inhuman point of view possibly exist? I suppose that the only way of withstanding that certainty and that point of view is by giving in to the temptation of believing in the imminent destruction of that which will undoubtedly outlive us.