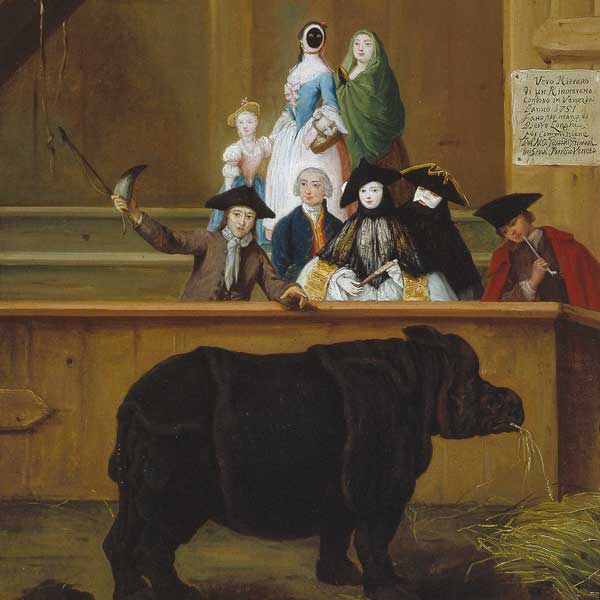 Sudan was the last remaining male white rhino in the world. The last of a species exterminated by poaching and deforestation. He survived forty-five years in the Ol Pejeta Conservancy in Kenya, but around mid-March 2018 his delicate health worsened. It was then that a team of vets decided on a merciful release for him. Sudan’s death was greeted everywhere with dismay. In addition to announcing the sad news of the animal’s death, however, the environmental NGO WildAid added that two female examples of the species remained alive—Najin (Sudan’s sister) and Fatu (Najin’s daughter)—and that in future they might be fertilised using semen samples taken from Sudan. In the case of several highly endangered species, it is customary practice for scientists to freeze the semen of dead animals; the hopes for artificial fertilisation are not great, but it represents the only material possibility remaining when everything seems lost.

But while in nature the species is in danger, in art (perhaps because of we humans’ bad conscience) rhino mania has returned. It is not rare to find a rhinoceros in a film, as in Paolo Sorrentino’s Loro 1, in which a large, grey rhino wanders around the city of Rome, or in the gardens of the Venice Biennale, where the Taiwanese artist Shih Li-Jen set up his enormous metallic King Kong Rhino to draw attention to the sad fate of this species. But it is not only bad conscience: there is also wonder that plays an important role. Many artists over time have been fascinated by rhinos, giving that slow and aesthetically imperfect body a significance that transcended the animal itself. Think of Dalì’s phantasmagorical explanations about the rhinoceros horn, defined as the basis for all artistic elaboration: both a phallic form and a perfect logarithmic curve. Fellini, instead, in his film And the Ship Sails on, has one of his characters say “Did you know that the rhino gives an excellent milk?” towards the end of the film. After that film, the rhinoceros became a Fellini creature and the phrase, which stimulated rivers of ink on the part of film critics (and which most likely inspired Sorrentino’s Loro), was a nonsense that perhaps was not meant to be taken literally. This takes us straight to Ionescu, for whom the animal becomes the very symbol of his theatre of the absurd.

But this fascination began well before Fellini or Ionescu. Back in the sixteenth century, people were already swooning for rhinos. It was Ulysses, a male rhinoceros donated by an Indian maharajah to the king of Portugal, Manuel I, who set off the fashion. He was the first to sail the seas and land in Europe. It must be said that the rhinoceros was well-known already to the ancient Romans, as witnessed by the beautiful mosaic of the Great Hunt in Piazza Armerina, but in the Middle Ages it had been forgotten and was often confused with the unicorn. Ulysses, on the other hand, was known in flesh and blood. His snout was immortalised in the white rock of the tower of Belém in Lisbon and the whole animal in the woodcut by Dürer, who drew it without ever having seen it, basing himself on the accounts of those who had. Dürer gives a face to the creature (which drowned off La Spezia), doing an almost perfect job; the only errors are the hairs under the chin and a horn drawn on its back.

Since then various rhinoceroses followed, taken from their natural habitat and brought to Europe as a freak show. Clara is certainly the most famous of this group of poor rhinos. She too came from India, like Ulysses, had a single horn and weighed a couple of tons. She had two owners. With the first owner, Jan Albert Sichterman of the Dutch East India company, she had learned how to behave as a polite young lady; so much so that she would take five o’clock tea, sometimes from a cup that the eccentric Dutchman would offer her. Her second owner was called Douwe Mout van der Meer. He was the captain of a ship, the Knappenhof, and he took her on tour throughout Europe. At each stage, the animal was a resounding success and the profits ended directly in the captain’s pockets. Clara was one of the rhinos to have lived longest in captivity and there are many traces of her in both paintings and eighteenth-century objets d’art. In the case of Clara, we can truly speak of rhino mania. The most famous painting in which she is portrayed is the one by Pietro Longhi, now in the Ca’ Rezzonico Museum in Venice, commissioned at the time by the Grimani family. There is another example of the same painting (without the cartouche bearing the name of Grimani as the client was different) today to be seen at the National Gallery in London. Clara tamely grazes on her hay, in a sort of hangar arranged as a stable. On the stands, we see members of the Grimani family and others wearing masks; in masks because Clara was one of the greatest attractions of the Venetian Carnival of 1751.

Truly, Clara pops up everywhere: she was portrayed by Jean-Baptiste Oudry and by the son of Pietro Longhi, Alessandro; she appears in anatomical treatises or as the base for improbable cuckoo clocks. At the time, there was even the fashion for a rhinoceros wig; this was all the rage at the French court. So we can speak of a continuity in the depiction of rhinoceroses from yesteryear to the present day. When all is said and done, the story of Clara or the extravagant mathematical calculations of Salvador Dalì tell us of a highly exotic animal and perhaps because of this, one that has also been greatly persecuted.

Today, however, anyone drawn to the rhinoceros is fortunately against the slaughter of this creature that has taken place for its horn of keratin, the same material as our own nails and hair. It is no coincidence that in the nature section of the World Press Photo 2018, it was a photograph of a rhinoceros that won. Photographer Neil Aldridge worked in Botswana (where the rhinoceros is portrayed on the national currency) with the people who today are saving the young orphans whose mothers are killed by poachers. Aldridge’s photograph is an important gesture towards this animal that for centuries has asked only to be respected by we humans.